Olde Mecklenburg Brewery is famed for their german style brauhaus and brews. Just last weekend, they opened their new facility which is about a gazillion times as big (and beautiful) as the old warehouse style brewery. 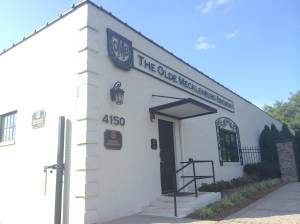 Sticking to their traditional German style beers and not adding in jalapeños, peaches or thyme like some of our other local breweries, Olde Meck has their own niche within Charlotte’s world of breweries. 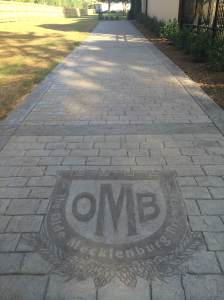 Copper is a long time favorite beer in the Queen City, as well as their Captain Jack Pilsner. Occasionally, they’ll introduce a new beer, such as their anniversary beer or the recent Southside Weiss, but they never venture outside of their German roots. So if you’re looking for quadruple hops or fun flavors, go hang out at Unknown, NoDa or Birdsong. If you want a classic taste and style, you’ll want to check out Olde Meck.

The new Brauhaus is strikingly gorgeous. It’s decorated perfectly to match their style, with old barrels for tables, stunning wood everywhere and a crisp look and feel. 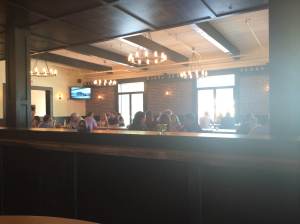 There is plenty of room to move around in the new place without feeling crowded, and if you don’t want to go inside, there’s an amazing outside biergarten that awaits you.

There’s a self-serve station in the biergarten for ordering food and drinks, and plenty of seating. This will be HUGE when Mecktoberfest and their other festivals happen. Plenty of room for not just standing, but there’s actual seating! Not into sitting down? Feel free to play cornhole or bring your pup and play in the yard (just be careful, it’s not totally fenced in!). Be sure to join them for one of their Wine & Design nights, Yoga on Tuesdays (6:30 PM), or music on Fridays.

Kudos to OMB on their new space. It’s perfectly designed and absolutely spectacular. I know great things will happen here for years to come.

While it’s not technically Southend as it’s classified in some places (more Steele Creek-ish), it’s worth spending an afternoon indulging in German beers and enjoying the feeling of being in the city but outside of it at the same time. Prost!