In 2014, the Charlotte Knights moved from their Fort Mill location to the center of our city. While their season hasn’t been as successful in terms of wins as they might like, the stadium is a success with fans. If you’re sitting on the 3rd base side of the field, you have an excellent view of the skyline. If you’re on the 1st base side, you’ll want to keep your eyes open for foul balls. 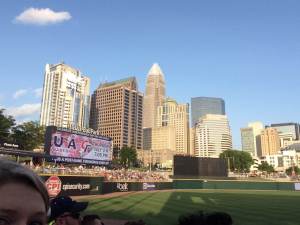 The stadium offers many local options for food and drinks, including Queen City Q and Knights Ale by Noda Brewing. Other options for craft beer are sold as well, and domestic beer is available for those of you who haven’t branched out yet. 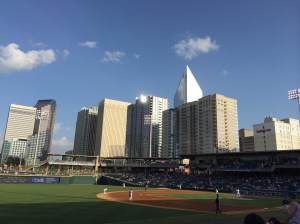 Having sat on both sides of the stadium, I have to recommend seats in the 117-118 area. You have the best view of the city, a good view of the game and are close to food and drink. There is a parking deck by the stadium, so parking is convenient. If you’re going to a night game, you can plan for dinner in advance and then walk over to the stadium. Nothing is a far walk in Charlotte. 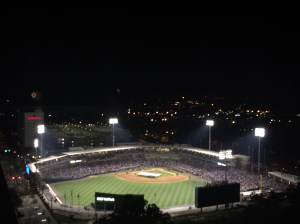 It pays to have friends who live uptown, as you get to see the stadium from a different point of view. We were lucky enough to watch the fireworks on the 4th of July from a Trade Street highrise, but not before we saw this stunning sunset. 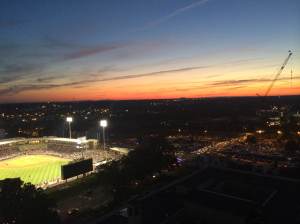 While the Knights lost their game on the fourth, it wasn’t a total loss. This was the first year for the fireworks in the stadium (obviously) and they were a hit with fans in and out of the stadium. Several times we thought the show had ended and then a new round of sparkly booms would occur. Go ahead and mark your calendar for next year’s 4th of July celebration, you won’t want to miss out. 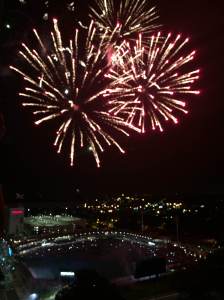 Tickets are relatively inexpensive for games and the experience you get. You can snag a couple seats for about $35 and beers aren’t TOO expensive either (around $7.50 for a pint). Head out and see the Charlotte Knights in their new stadium, so in 10 years you can say you watched them from the beginning. By then, we will have a whole new round of Northern transplants in the city!

One thought on “Fun Knights”