A few weeks ago, I ran my last race of 2014 in the form of a trail race at the USNWC. The We Believe Santa 5k happened on a fabulously sunny December day and started near the new Pumphouse Biergarten which is going to be amazing in the spring/summer. 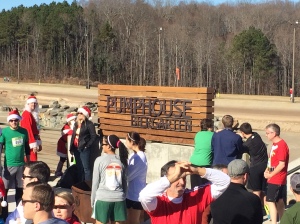 Runners were able to participate in a costume contest (which many did), have their photos taken with the Coke polar bear and also received these awesome shirts for participating. 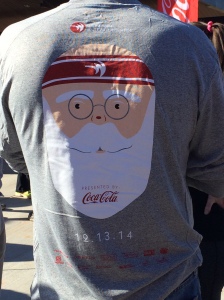 The race started in heats, which was a change from past races. If you’ve ever done a trail race, you know the trails are thin and there tends to be a bottleneck of runners at certain points. That didn’t happen in this race for the most part and was much appreciated. Also, it was a chip race, so no matter what wave you started in, your time was counted by your chip and not just the running clock.

The race went around the perimeter of the USNWC and then looped through the trails before coming back around the same trail to the finish. Only a mile or mile and half was spent on actual trails but it was still a nice run. 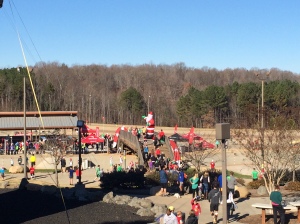 The whole event was actually exceptional, with NoDa Brewing serving Santa Baby to runners, burgers and hot dogs being served at the pump house biergarten and the weather couldn’t be beat.

Looking forward to experiencing the new biergarten in warmer weather and having more options for beer/food. If you haven’t participated in a race at the USNWC, you should add one to your calendar. They do a wonderful job of putting on races and events! And even if you don’t want to run, you can hang out, have a beer and cheer on the runners as they finish!